Experience, education and the willingness to take the time to listen to people’s debt issues and financial problems makes Kimberly Kramer the right choice for you. She is “the Compassionate Attorney”.

“I will guide you through the bankruptcy process and help you to get back on stable financial ground.” 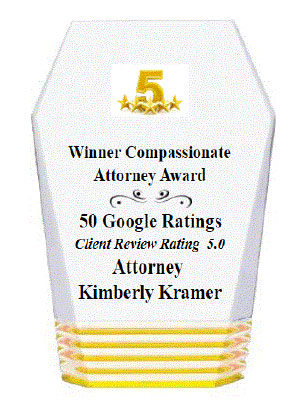 After graduating from Michigan State University with a Bachelor’s of Science in Social Sciences, Ms. Kramer graduated from Valparaiso University School of Law in the top fifth of her class. She participated in an externship with the United States Bankruptcy Court for the Northern District of Indiana. She also interned at Dow Corning in their finance law section during their chapter 11 days.

Ms. Kramer was a founding member of Jacobs & Kramer, P.L.L.C. where she practiced for four years before opening her own practice in 2006. She practiced primarily in consumer bankruptcy but also represented people in misdemeanor criminal charges, divorce work, collections, small estate planning and a few personal injuries. She became a partner after two years. The firm, Jacobs & Kramer, split in 2006. She remains at the Bay City office.

Ms. Kramer is an active attorney on the pro bono roster for Legal Services of Eastern Michigan where she has committed to representing at least twelve debtors per year on a pro bono basis, and has assisted in training staff attorneys to practice bankruptcy law.

Ms. Kramer attends professional education seminars at least semi-monthly. She also participates in speaking events with her associations and frequently contributes scholarly writings to them.

Please call us today to schedule your free office consultation!

What the People are Saying

Kimberly Kramer Attorney
5.0
Based on 171 reviews

Brenda Casey
05:36 11 Nov 22
I was nervous at first because I didn't know what to anticipate. After I received my first phone call from Kimberley, I knew right away she was the best! She isn't "stuffy", she's down to earth, she addressed my concerns and put my mind at ease. I would give Kimberly more than five stars if I could!!

Shana Glazier
15:42 13 Sep 22
Kimberly is the most helpful attorney I contacted for my bankruptcy. She made sure I knew what was going on at ALL times and calmed me down from thinking I would never own anything or have another credit card ever again. She made sure I was okay at every step and even contacted me right after my hearing to discuss what went on, which I wasn’t expecting and was very appreciative of. I was able to be myself with her and she matched my personality, making me even more comfortable. Never made me wait, and also made me feel like I was her only client. She is a great lawyer. She is also a great person, and I didn’t expect to be walking away from this actually LIKING my attorney. This is a five star worthy experience. I’ve never posted a review for anything before but this deserves to be written down. Go with Kimberly if you are looking for a bankruptcy attorney. You won’t be disappointed. Also, very first responder friendly so all my brothers and sisters in EMS/fire/police; if you get in a financial jam and have to file, choose Kimberly!!

Chachagirl
21:31 26 Aug 22
If I could give a thousand stars I would 🌟!!Attorney Kimberly Kramer and her wonderful staff were beyond kind.. knowledgeable and very helpful. In a very stressful situation I felt very at ease and confident . Any questions I had were answered in a prompt and friendly way.I highly recommend!🌟🌟🌟🌟🌟

Jalae Ulicki
16:39 24 Aug 22
Kimberly Kramer is the absolute best! She came recommended to me by both lawyers and judges. She was knowledgeable, patient and understanding. Following my car accident I was at a loss what to do- Kimberly reviewed all my options and gave me the information I needed to make a decision. I would be lost without her. THANK YOU - you are awesome!

Cheri Shaw
00:12 12 Aug 22
Fantastic attorney. Her and her assistants have helped me through every step of the process. Both friendly and professional, and very thorough. She lifted a huge weight off my shoulders.

Jason Gower
12:58 27 Jul 22
Kimberly Kramer is a wonderful lawyer and even more fantastic of a human being. If you need someone who can and will understand your situation individually - I 100% recommend her. A valued colleague and most importantly a friend.

Brennah Boyle
17:32 29 Jun 22
I would 110% recommended Kimberly and her staff, they are amazing! When you are going through something that is difficult and you have a lot of questions, she definitely goes above and beyond to help you and answers all your questions. Very kind and attentive and extremely helpful. Don’t look for anyone else, I appreciate all of your help!

Jase Leigh
15:29 21 Jun 22
The best lawyer ever! She listens very well. She's very intelligent, giving guidance and making sure everything is done correctly and to the t. She really shows that she cares and wants to help. Highly recommend 10 out of 10!

Kathleen Nalett
19:35 07 Jun 22
My first appointment with Kimberly I knew she was the right bankruptcy lawyer for me. She treated me with a compassion and respectful meeting. Kimberly walked me thru the bankruptcy process and explained everything that would take place. Her staff was pleasant and helpful too. I would hire her and her staff in a heartbeat.

Anthony Gates
20:48 28 May 22
Greatly appreciated Kim Kramer services. She is friendly and perfessional. She took care my bankruptcy quickly and efficiently. I definitely keep in contact with her for other attorney needs as well. A big thank u to Kim and her great staff.

Scott L
15:16 24 May 22
The process with Kimberly was extremely easy. She was easy to work with and took off situations into consideration to make the whole process as smooth as possible. Thank you

Tracy Conrad
01:15 20 May 22
I would highly recommend Kimberly Kramer.She is very knowledgeable and efficient. Kimberly all around did a great job for me.

Dennis Wassenaar
01:02 20 May 22
Kimberly and her staff get a A+ in my opinion, they make the process of bankruptcy as painless as possible. If you are thinking about having to do it, give her a call, she'll help you decide the right direction to take and it is bankruptcy she will streamline everything and get you on the right path to building your credit back

Erin Harmon
18:45 04 May 22
Kimberly is a fantastic Attorney, she really cares about her clients and she has helped me through a very tough time, her work ethic is PHENOMENAL she is always a phone call or email away. I would recommend her to anyone.

Carolyn Jeske
21:28 22 Apr 22
I would like to highly recommend Kimberly Kramer to represent you in your legal issues. As a business owner myself you look for qualities in a business and person that you represent yourself. You want polite, easy to talk to, efficient and professional as she is in all these qualities and more! From start to finish she explained everything in detail and made it easy to understand and proficient. Please call for a consultation you will glad you did!

Diana Schwartz
14:16 24 Mar 22
She is a excellent attorney! Was so help full. Would recommend for any one looking for and attorney. Took time and explained everything Had a great experience with her help!
‹
›
See More